More than 60 per cent milk in country unsafe, adulterated with paint,
detergent: Government

New Delhi: Over 68 per cent of milk in the country does not conform to the
standards set by the Food Safety and Standards Authority of India (FSSAI),
the Centre has told the Supreme Court on a plea for checking sale of
synthetic and adulterated milk and various dairy products.

The submission has been made by the Centre in its affidavit which referred
to a survey conducted by the FSSAI, which had found that over 68 per cent of
the "non-conforming" milk was found in urban areas, 66 per cent of which was
loose milk.

According to the FSSAI's 2011 survey, the most common adulterant was found
to be the addition of water, and the main reason for deviation from the
standards was addition of glucose and skimmed milk powder. It also found
that in some samples, detergent was mixed.

The affidavit was filed in response to the notice issued on a Public
Interest Litigation (PIL) by a group of citizens, led by Swami Achyutanand
Tirth of Uttarakhand, seeking a check on sale of synthetic and adulterated
milk and various dairy products.

Notices had also been issued to Haryana, Rajasthan, Uttar Pradesh,
Uttarakhand and Delhi governments on a PIL alleging that synthetic and
adulterated milk and milk products are prepared using urea, detergent,
refined oil, caustic soda and white paint which, according to studies, are
"very hazardous" to human life and can cause serious diseases like cancer.

The petitioners' advocate Anurag Tomar said that the affidavit is silent on
many aspects which allegedly refer to adulteration of milk and its products.

The affidavit said that over 83 per cent of the non-conforming milk in rural
areas was found to be loose milk.


The FSSAI had analysed 1791 samples of milk randomly collected from 33
states and Union territories to identify the common adulterant in milk, both
loose and packaged.

It had gathered samples from rural and urban areas and after analysing them
at five different public sector laboratories, it had found that 68.4 per
cent of the samples were non-conforming (adulterated) to its standards. 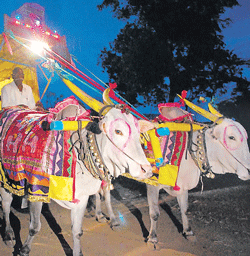 Great thanks to Sridhari Madhav Prabhu for this post.

This farmer is no engineering student who has undertaken a project as part
of his course. Yet, his innovation is in no less an achievement, in that he
has converted mechanical energy that would have otherwise gone waste into
electricity, something that is becoming more precious by the day.

highlight: The hitech bullock cart developed by farmer Shankar Badigera run
on power generated by the cart wheels.DH photosThe initiative of Shankar
Badigera, hailing from Karoshi village in the taluk, has made journeys in
his humble cart an enjoyable experience, without spending the lakhs that
high-end cars cost.

His bullock cart is not just a multi-utility vehicle, it is also a visual
treat with the bullocks and the cart tastefully decorated.

The colour clothing on the bullocks and the lights on the cart give it the
rustic look.
The family of Badigera, who has studied only up to class V, undertakes the
annual pilgrimage to Yellammana Gudda and it is spared the monotony of the
weeklong journey, thanks to the tape recorder, the TV and the fun that run
on the power produced every time the wheels turn. Dynamos are attached to
the wheels and a battery is connected to the dynamo. The power generated by
the dynamo charges the battery which runs the electrical devices.

Badigera's never say die spirit has often landed him in financial trouble,
whenever the spare parts had to be replaced.

His family looks forward to the trip, complete with the luxuries, the
disarming jingle of the bells tied to the bullocks' necks and cool breeze of
the night. Badigera's family travels mostly in the night as the blazing sun
of the day can make the pair of bullocks tired.

That is the reason why the vehicle has headlights and indicators. Badigera
has a mirror fixed in front of the driver's seat, so that he too can watch
the TV reflected in the mirror.
That's what you call making most of life.
Posted by Unknown at 01:07:00 No comments: Links to this post