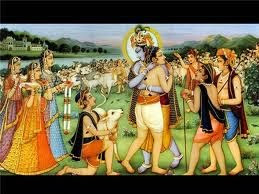 First and foremost, our goal at Murari's Kirtan Valley is the pursuit of the
pure chanting of the Holy Names. This is certainly enhanced with a lifestyle
conducive to gaining the cherished goal of pure kirtan.

No one receives a salary, not me nor anyonei no stipends, etci. everyone
here feels that to place oneself in this village with full dependence on
Krsna is the best starting point. Yes, starting point. If your devotion is
mixed with enhancements of this world, then you might wanna think about a
restart.

If you receive salary or stipend for your service, then your reward is there
in the money. This is going on, and it has been accepted, but it is outside
the lifestyle of pure devotional service and attitude.

So if you are feeling dissatisfied at heart with the present structure of
your devotional service, perhaps you should consider restructuring it free
from the desire for profiti.. and might as well throw in adoration and
distinction.

Murari's Kirtan Valley just had a wonderful wedding, The marriage of James
and Olivia. You can visit our website for pics and suchi
www.murarisevaka.com. You can also get a nice overview on our Facebook.

About 150 friends and relatives participated in the ceremony, where only the
Maha-Mantra was vibrated by all.

James and Olivia are visibly a very special match. The pictures tell all.
They have submitted themselves to the scientific process of surrender
designed by the great devotional scientists, more commonly called our
Acaryas. The Holy Name is everything for them, and full dependence on Krsna
is everything for them.

Murari's Kirtan Valley is becoming a sanctuary for the soft heartedi no
politics, no faultfinding, no agendas, no conspiracy theories, no etceteras
allowed, kicked out, not allowed.

Complete dependence on the cows, land, and of course Krsnai to sustain us.

Make a visit someday and enjoy a taste of the life that Srila Prabhupada has
really given usi"Make Vrindavan Villages" is the order, and we are following
that one and will complete it! Hare Krsna,
your insignificant servant on call at Murari's Kirtan Valley
Gadi das
Posted by Unknown at 05:28:00 No comments: Links to this post

Moving people off of the land

This is important information for anyone attempting or even thinking of
doing something on the land. Under the name of sustainability there is a
widespread attempt to move peope OFF of the land and into cities, and it is
taking place in different ways in different countries. All of this is going
on to fulfill a UN Treaty signed by 178 nations 21 years ago at Rio de
Janeiro -- Agenda 21 -- all in the name of combating poverty and saving the
earth. You can download and read the treaty from here:
http://sustainabledevelopment.un.org/index.php?page=view&nr=23&type=400&menu
=35

According to some there is nothing on the face of this planet that will not
be impacted by this treaty.

In America and India the effort to clear people off of the land is going on
through a program to bankrupt farmers:
http://www.thecommonsenseshow.com/2013/06/19/the-forced-depopulation-of-amer
icas-rural-areas/

In China they are simply forcing people into 'ghost' cities that have been
previously built:

In Russia they are simply going to stop providing infrastructure to all but
21 urban centers, leaving anyone in that vast land to live without
electricity, gas, or piped water.  The proposal is to relocate people to
twenty giant agglomerations where Russia's main natural resources such as
oil and gas were located.
http://www.telegraph.co.uk/news/worldnews/europe/russia/8137816/Russia-consi
ders-biggest-population-redistribution-since-Stalin.html

For some of the bizarre concepts being considered, such as 'living units' as
small as 200 sq. ft.,  please see what Occupy Corporatism writes here:
http://www.occupycorporatism.com/eco-fascists-push-agenda-21-mega-cities-to-
replace-growing-cities-and-rural-areas/

Look at this map where 50% of the American land mass will be totally
off-limits to any human activity and ask yourself where the people that live
there are going to go:
http://2.bp.blogspot.com/-hXGSRx4D7Po/TWo5PLIdXaI/AAAAAAAAHFU/gsrqtDhPszY/s1
600/Wildlands-Map.jpg

And recently the EU declared that it is unlawful to plant any seeds that are
not registered with (approved by) the government:
http://www.naturalnews.com/040214_seeds_European_Commission_registration.htm

Perhaps good if this is used to restrict GMO planting; perhaps bad if
intended against planting of heirloom seeds. Time will tell if is a threat
or protection.

Several years ago in Mayapura I gave a presentation on this subject. It
sound weird or 'conspiratorial' to say that this is being done to force
people to give up their independence on the land, but it is going on
nontheless. Don't expect the government to make an announcement that this is
what they are doing. Judge by the results.  It behooves anyone interested in
village/simple living to know about this as it will likely impact your
efforts in some way in the future. Go right to the source:
http://sustainabledevelopment.un.org/index.php?page=view&nr=23&type=400&menu
=35

All the more reason to seriously call on the holy names of the Lord to make
His appearance to rectify the anamolies of the age of Kali.

His Divine Grace A.C.Bhaktivedanta Swami Prabhupada, Founder Acharya of International Society of Krishna Consciousness wanted that ISKCON establish ideal communities to show example to the troubled world. He instructed - Make Vrindavana Villages. The documentary shows a humble effort at Indonesia of such a community in working. Wonderful interviews of eminent personalities rich with their experience and good line up of the story engages the viewer to fully extract the essence of the mission.

In a rare gesture, Muslim community in Mathura has taken a pledge that they would not allow cow slaughter in the district.

"The Muslims of Mathura are not in favour of cow slaughter. It is the handiwork of outsiders who kidnap cows from here at night and then slaughter them," said Abdul Zabbar, convener of the anti-cow slaughter convention held at Islamia Inter College here last evening.

"Cow slaughtering was started by Britishers in order divide both the communities.    The country got independence owing to Hindu-Muslim unity," Sant Ramesh Baba, who was the first to start crusade against mining in hillocks of Barsana about two decades ago, said.

In order to protect the culture of Brij, unity in both the communities is a must, Sant Jai Kishan Das, National President of Yamuna Rakshak Dal said during the convention, which also addressed issues relating to pollution of river Yamuna.

"I am sure that none of the Muslim in Mathura is involved in cow slaughtering since 99 per cent of the Muslims here do not consume beef," claimed SP leader and social worker Ashok Agrawal.

Several Muslim leaders present during the convention jointly pledged that they would not allow cow slaughtering in the district and would start a crusade against it.

Admita Kumar (middle) joins her aunts Hirdeshni Gautam (left) and Ashodra
Gautam in a Sanscrit reading during classes at the Flagstaff Ashram in Suva.
Picture: JONE LUVENITOGA + Enlarge this image

HUNDREDS of people around the country are taking the time to learn Sanskrit
language in seven days.

The free online encyclopedia, Wikipedia, describes Sanskrit as a historical
Indo-Aryan language, the primary liturgical language of Hinduism and a
literary and scholarly language in Buddhism and Jainism.

Sanskrit is listed as one of the 22 scheduled languages of India, and it is
an official language of the State of Uttarakhand. It also holds a prominent
position in Indo-European studies.

On the invitation of the Fiji Sevashram Sangha, world renowned Sanskrit
scholar Prof Gajendra Punda is now taking classes in Labasa before doing the
same in Lautoka.

Swamy Sanyukta Nanda of the Fiji Sevashram Sangha said classes in Suva were
well attended and participants numbers had to be restricted to 55.

"The group was organised into two smaller ones, one session being run by his
wife and one by Prof Punda. Participants were of all age groups and from all
walks of life such as academics, workers and retired senior teachers," Swamy
Nanda said.

"The way this course was run was easy to understand and it captured the
participants' interest and enthusiasm on the first day and they were
compelled to take time every evening for classes."

Participants who attended classes in Suva, agreed that the Fiji Sevashram
Sangha had provided an opportunity to get them to better understand and
learn conversational Sanskrit.

Many said they never imagined they would be able to speak a word of Sanskrit
in their life.

He thanked Mr Punda for travelling to Fiji at his own expense to provide
Fijians the opportunity to learn Sanskrit.

He reminded participants that every nation's progress was measured by its
sampati (wealth) and sanskriti (culture), saying "sadly people are
accumulating wealth but losing their culture".

Swami Nanda also said Sanskrit was the symbol of Hindu culture and heritage
and Hindus should revive it.

Classes are now being held in Labasa while the Lautoka session is scheduled
for June 3-10.
Posted by Unknown at 07:44:00 No comments: Links to this post