"We are going to convince butchers that they should give up slaughtering
cows. We are opposing cow
slaughter<http://timesofindia.indiatimes.com/topic/Slaughter>
as it is against the law," said Haji Dilawar Yakub, president of the newly
formed Gujarat Muslim Gau Hifazat Samiti in Bharuch.

He said that the decision to form such a committee was taken by
organizations after the alleged police torture of Sansrod villagers. These
organizations have planned a demonstration in Vadodara on Wednesday in this
regard.

The committee in Bharuch has 15 members and 150 volunteers who have begun
sensitizing Muslims on how cow slaughter has resulted in exploitation of
butchers and traders by animal protection activists in connivance with the
police.

"Muslims in four villages, including Vahalu and Hingala, have given an
undertaking that they will not indulge in cow slaughter," Dilawar said, and
added they plan to start propagating this idea across Gujarat.

Organizations like Jamiat-e-Ulema-e-Hind, Gujarat, Bharat Bachao Andolan,
and Gujarat Muslim Development Council have supported the cause.

--
visit:
www.globalvarnasramamission.blogspot.in
---
You received this message because you are subscribed to the Google Groups
"Global Varnasrama Mission" group.
To unsubscribe from this group and stop receiving emails from it, send an email
to global-varnasrama-mission+unsubscribe@googlegroups.com.
For more options, visit https://groups.google.com/groups/opt_out.
Posted by Unknown at 01:43:00 No comments: Links to this post 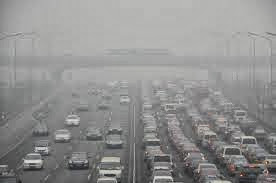 
BEIJING (AP) — Visibility shrank to less than half a football field and
small-particle pollution soared to a record 40 times higher than an
international safety standard in one northern Chinese city as the region
entered its high-smog season.

The manager for U.S. jazz singer Patti Austin, meanwhile, said the singer
had canceled a concert in Beijing because of an asthma attack likely linked
to pollution.

Winter typically brings the worst air pollution to northern China because of
a combination of weather conditions and an increase in the burning of coal
for homes and municipal heating systems, which usually starts on a specific
date. For the large northern city of Harbin, the city's heating systems
kicked in on Sunday, and on Monday visibility there was less than 50 meters
(yards), according to state media.

"I couldn't see anything outside the window of my apartment, and I thought
it was snowing," Wu Kai, 33, a housewife and mother of a baby boy, said in a
telephone interview from Harbin. "Then I realized it wasn't snow. I have not
seen the sun for a long time."

She said her husband went to work in a mask, that he could barely see a few
meters (yards) ahead of him and that his usual bus had stopped running.

"It's scary, too dangerous. How could people drive or walk on such a day?"

The density of fine particulate matter, PM2.5, used as an indicator of air
quality was well above 600 micrograms per cubic meter — including several
readings of exactly 1,000 — for several monitoring stations in Harbin,
according to figures posted on the website of China's environmental
protection agency. They were the first known readings of 1,000 since China
began releasing figures on PM2.5 in January 2012, and it was not immediately
clear if the devices used for monitoring could give readings higher than
that.

A safe level under WHO guidelines is 25 micrograms per cubic meter.

Primary and middle schools and some highways were closed, said authorities
in the city, which is in China's northernmost province bordering Russia. At
least 40 flights to destinations in southern China and Beijing among others
were canceled or postponed at Harbin's Taiping International Airport on
Monday morning.

Austin's management team said the 63-year-old singer had been treated in a
hospital Friday morning for an asthma attack in combination with a
respiratory infection. She returned to her hotel later Friday to rest, but
was unable to perform at her Beijing concert scheduled for Friday evening.
Her Saturday night concert in Shanghai went ahead.

Her manager, Barry Orms, said Monday that Austin, as an asthma sufferer,
would have been "affected by the amount of pollution." He said that it
wasn't their goal to place blame, and that "Patti has expressed our belief
that the Chinese government can be a leader in this very important issue."

On the morning ahead of her concert Friday, Beijing's air was visibly
polluted, with the city's environmental monitoring center warning children,
the elderly and those with respiratory illnesses to reduce outdoor activity.

China's major cities have some of the world's worst smog. The government was
long indifferent to the environment as it pursued economic development, but
has begun launching some anti-pollution initiatives after mounting public
frustration.

Last month, China's Cabinet released an action plan that aims to make a
small reduction in the country's heavy reliance on coal to below 65 percent
of total energy usage by 2017. According to Chinese government statistics,
coal consumption accounted for 68.4 percent of total energy use in 2011.
Posted by Unknown at 06:07:00 No comments: Links to this post