How one should behave with women? 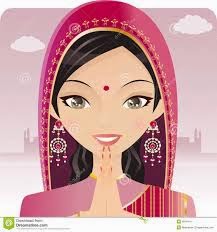 Wherever women are respected in such places godly people live (Manu smrti, 3.56)

Women other than wife must be seen as mother - matravat para daresu (Chanakya neeti, 10)

One should not allow oneself to sit on the same seat even with one's own mother, sister or daughter, for the senses are so strong that even though one is very advanced in knowledge, he may be attracted by sex. (Srimad Bhagavatam, 9.19.17)

There are two classes of women created by Brahma. One class are chaste women and the other class unchaste women called as kulata ja̅ti. (Narada Pancharatra, 1.14.117)

He who avoids women on the six forbidden nights and on eight others, is equal chastity to a brahmaca̅ri although he is in gṛhastha ashrama.

Woman is compared to fire, and man is compared to a butter pot (The butter melts instantly in association with fire). Therefore a man should avoid associating even with his own daughter in a secluded place. Similarly, he should also avoid association with other women. One should associate with women only for important business and not otherwise. (Srimad Bhagavatam, 7.12.9)
Posted by Unknown at 22:34:00 No comments: Links to this post