Email ThisBlogThis!Share to TwitterShare to FacebookShare to Pinterest
Labels: Vimana

Back to natural living!

Karpagam points outside her window: “This is the view I wake up to every morning.” Ragi and neem seeds are drying in the sun. Parrot green paddy fields roll out into the distance, their borders dotted with palm trees. A gentle breeze drifts in — there is no need for a fan, even though it’s peak summer in this quiet village near Maduranthakam in Tamil Nadu.
A commerce and management graduate, Karpagam was a top-ranking executive in a shipping company, her job taking her around the world. While volunteering with a non-profit organisation, she met her husband Sriram “We both wanted the same things in life,” she says. Sriram is an IIT-IIM graduate, degrees he dismisses. “Why is it important?” he asks. “What is more important is what I was doing (or not doing!) for society.”
Five years ago, the couple quit their lives in Bombay to take up farming. How did their families react? “Violently,” Sriram laughs. “They were shocked,” says Karpagam. Eventually their parents came to respect their decision.Reading Gandhi and Kabir, Sriram realised that “Nature, and not human beings, is supreme”. What bothered him most was the chemicals in the food he ate everyday. “It’s poison,” he stresses. He was sure he wanted to quit and “do something with food”. Karpagam says, “I had an out-of-body experience one day,” when she was sales manager in a company. “I suddenly thought, ‘will the world stop because a new model of car is not sold every six months’?”

The transition itself wasn’t difficult. “We hit the ground running,” smiles Sriram. “Farming is physically taxing, that was our only worry. Mentally, we were both prepared.”
Today, they grow rice, groundnut, sesame, ragi, green gram, and urad dal. They distribute some of the produce to family members; the rest they sell. “We spend about Rs. 15,000 on one acre of paddy and make about Rs. 25,000. Commercially, I can make much more but there’s no point escaping an exploitative society only to return to it,” says Sriram.
They farm and drive away parrots and cows from their field. In the evenings, they read, blog, or do their accounts. These well-educated farmers quote Dharampal, Wendell Berry and Gandhi, but don’t consider them as inspirations. “Less than 200 years ago, this is how people lived. Our inspiration is our farmers. We are alive because of them,” they say.
Posted by Unknown at 16:41:00 No comments: Links to this post

Toyota Shows How Their Car Runs on Cow Manure!

There are those who don't believe that hydrogen, as an alternative fuel, is a feasible source. Yes, Elon Musk and Carlos Ghosn, we are looking at you. But for all these non-believers, Toyota came out with an answer in the form of the fuel-cell car - Mirai, which has already seen the light of production in Japan but the company has plans to introduce it in other markets soon.
As part of their Earth Day promotions, the company released the first episode of its series of Toyota Mirai ads called 'Fueled By Everything'. With this ad it tries to prove how hydrogen can be stripped from cow manure to power the Toyota Mirai.
It's very clear that through these ads, Toyota takes the cheeky road for there are many who have called hydrogen a bullshit fuel source. So the apt thing to do here was prove that it is indeed bullshit that powers the Toyota Mirai. The video essentially shows how hydrogen can be harnessed by processing cow manure, and therefore says that it isn't all that difficult. 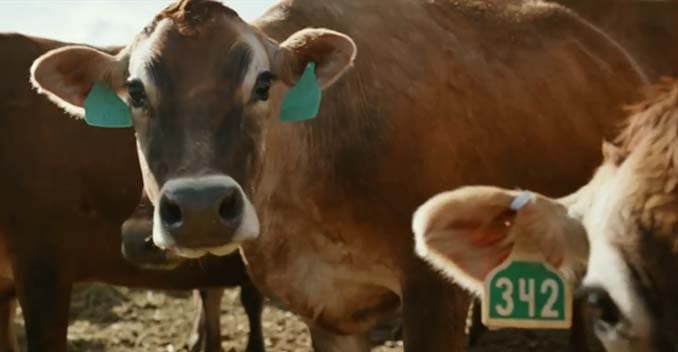 The Mirai is the Japanese carmaker's first mass-production hydrogen-powered fuel-cell car, and it comes after 20 years and millions of dollars of investment in research and development. This is how it basically works.

The gas goes through a hydrogen fuel cell stack that mixes oxygen with the hydrogen and this reaction, in turn, generates electricity to charge the on-board battery. The Toyota Mirai is powered by a 114 kilowatt fuel cell stack along with a 113 kilowatt electric motor on board. The combination of hydrogen and oxygen creates pure water, which is dumped via the tailpipe while driving or when the vehicle is parked.
According to Toyota, 0-100Km/h takes around 10 seconds and the range expected from the car in real world driving conditions is about 550km. If you were wondering how long it takes to refill the tank, well you'll be surprised if I say 5 minutes. Currently Japan has only 10 hydrogen stations, though there's a plan to take that number up to 100 by the end of 2015.
The car is currently priced at around Rs. 35 lakh in Japan and the price could dip a little with select markets offering government incentives.
Posted by Unknown at 02:49:00 1 comment: Links to this post