If the Americans like to eat GMO products, let them eat it then. We don’t need to do that; we have enough space and opportunities to produce organic food.” – Medvedev

Russia has been considering joining the long list (and continually growing) of anti-GMO countries  for quite some time now. It does so after a group of Russian scientists urged the government to consider at least a 10-year moratorium on GMOs to thoroughly study their influence on human health.

“It is necessary to ban GMOs, to impose moratorium (on) it for 10 years. While GMOs will be prohibited, we can plan experiments, tests, or maybe even new methods of research could be developed. It has been proven that not only in Russia, but also in many other countries in the world, GMOs are dangerous. Methods of obtaining the GMOs are not perfect, therefore, at this stage, all GMOs are dangerous. Consumption and use of GMOs obtained in such way can lead to tumors, cancers and obesity among animals. Bio-technologies certainly should be developed, but GMOs should be stopped. We should stop it from spreading. ” – Irina Ermakova, VP of Russia’s National Association for Genetic Safety

(RIA Novosti/Ekaterina Shtukina)
A number of scientists worldwide have clearly outlined the potential dangers associated with consuming GMOs. I recently published an article titled “10 Scientific Studies Proving GMOs Can Be Harmful To Human Health,” you can read that in fullhere.  These are just a select few out of hundreds of studies that are now available in the public domain, it seems that they continue to surface year after year.
Russia completely banning GMOs, such a large, developed nation is a big step forward in creating more awareness with regards to GMOs. Ask yourself, why have so many nations banned GMOs and the pesticides that go with them? It’s because evidence points to the fact that they are not safe, they are young, and we just don’t know enough about them to safely consume them. They just aren’t necessary, so why produce them?
Within the past few years, awareness regarding GMOs has skyrocketed. Activism has played a large role in waking up a large portion of Earths population with regards to GMOs. People are starting to ask questions and seek answers. In doing so, we are all coming to the same conclusion as Russia recently came to.
In February, the State Duma introduced a bill banning the cultivation of GMO food products. President Putin ordered that Russian citizens be protected from GMOs.  The States Agricultural Committee has supported the ban recommendation  from the Russian parliament, and the resolution will come into full effect in July 2014.
This just goes to show what we can do when we come together and demand change and share information on a global scale. Change is happening, and we are waking up to new concepts of our reality every day. GMOs are only the beginning, we have many things to rid our planet of that do not resonate with us and are clearly unnecessary. We are all starting to see through the false justifications for the necessity of GMOs, no longer are we so easily persuaded, no longer do we believe everything we hear and everything we’re presented with. Lets keep it going!
For more CE articles on GMOs, click here.
For more CE articles on glyphosate, click here.
Sources:
Posted by Unknown at 16:48:00 No comments: Links to this post


The Sanskrit programme at Peking University has a long history, set up in the
1960s and subsequently expanded by renowned Indologist Ji Xianlin, who
translated dozens of works

Almost two millennia after the language first came to China through Buddhist
scriptures, renewed interest in Buddhist studies  and recent discoveries of
long-forgotten manuscripts in Tibet have sparked a revival of the study of the
ancient language among Chinese scholars.

Beijing’s Peking University has now launched an ambitious programme to train
more than 60 Chinese students in Sanskrit, with the hope of creating a team of
researchers to help translate hundreds of manuscripts containing scriptures
that have been found in Tibet and other centres of Buddhism, such as Hangzhou
in China’s east.


“There is a rich manuscript collection in Tibet, particularly. Many of the originals have not been recovered, and are only available in Chinese and Tibetan, so it is important for us to find a way to render them back into Sanskrit,” said Satyavrat Shastri, a renowned New Delhi-based Sanskrit scholar and poet, who is in Beijing this week as a visiting lecturer to meet and advise students and teachers here.
“What they are trying to do here is invaluable, and they are making great progress,” Mr. Shastri said, adding that he was pleasantly surprised by the students’ technical level.
“I was struck by the interest, of both teachers and scholars, in little details, such as getting the pronunciation perfect. They recited the Bhagavad Gita with me, and it was a unique experience. The pronunciation, the metre [of reciting the verses], was remarkable.”
The Sanskrit programme at Peking University has a long history, set up in the 1960s and subsequently expanded by renowned Indologist Ji Xianlin, who translated dozens of works and is seen by many here as single-handedly introducing classical Indian culture to a whole generation of Chinese.
Today, the programme hopes to carry forward the legacy of Ji, who died in 2009.
The university’s efforts received a boost in 2005, when it was given support by the Ministry of Education to expand admissions, part of an effort to boost manuscript research.
Now, for the first time, the programme has a regular annual intake of students at both undergraduate and post-graduate levels, currently training between 50 and 60 students.
“We want to continue what Ji Xianlin started,” said Duan Qing, a professor in Sanskrit and Pali who once trained under Ji. “Our programme is quite mature now, and is the only complete Sanskrit programme in China.”
She attributed the recent boost in funding to increasing government support for the humanities, ignored during the People’s Republic’s first three decades when the country’s focus was on development alone.
“Sanskrit research is being viewed with importance now,” she said. “India and China were culturally connected. I don’t think there’s another country in the world where so many Sanskrit works were translated into another language, and this has been going on for more 1,000 years.”
Ms. Duan heads the Research Institute of Sanskrit Manuscripts and Buddhist Literature at Peking University, which is working with regional governments and hoping to create an archive for lost manuscripts and palm-leaves. Graduate students will work with the institute to help translate scriptures.
Yu Huaijin, a PhD student who is studying Kalidasa’s Kumarasambhava, said she joined the programme because she believed it was playing the role of “a bridge between two cultures.”
“India and China are neighbours, but they know little about each other, especially the younger generation. It is a big objective for me to introduce Indian culture and literature to a Chinese audience,” she said.
Few Chinese students are interested in Indian culture, with much greater interest in Western literature. Ms. Yu, too, was first a student of Western literature — until she happened to read a translation of the Mahabharata by Ji Xianlin. “It was a different world,” she said. “And one that few Chinese are aware of.”
Peking University has also begun working with Sanskrit programmes in universities in the West, particularly in Germany, to improve both teaching methods and archiving practices.
Indian universities, have however, appeared to show little interest in taking forward cooperation. Mr. Shastri, who is an honorary professor at Jawaharlal Nehru University, admitted there was “precious little” cooperation between the two countries. There was room for much more, he said, encouraged by the positive response to his teaching methods this past week.
“We want to learn Sanskrit through traditional methods,” one teacher told him. “Not from the West.”
Posted by Unknown at 16:10:00 No comments: Links to this post 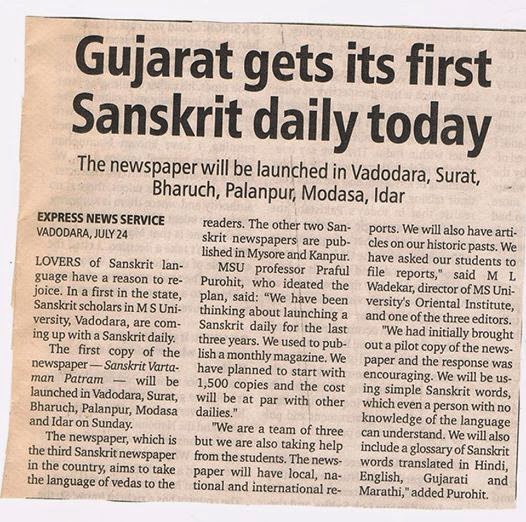 Sanskrit Newspapers: Mysore, Kanpur and now Gujarat! Shubamastu!
Posted by Unknown at 21:29:00 No comments: Links to this post