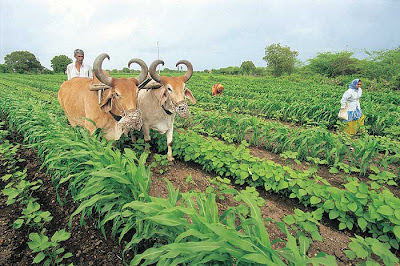 Great thanks to Sridhari Madhava Prabhu for this wonderful post!

AHMEDABAD: Gujaratis are going back to their roots. And, it makes good
business sense too. A buoyant agriculture in the state is luring an
increasing number of professionals and entrepreneurs to switch to farming.

Mahendra Patel, 42, recently closed down his electronics goods showroom.
Patel, who owns an acre of land on the outskirts of Ahmedabad, found growing
Dutch roses more lucrative than his business. "My income has grown many
fold," says Patel, who made a neat Rs 30 lakh this year.

Arvind Patel, a practising doctor put down his stethoscope to pick up a
plough. Patel, 70, now grows exotic vegetables in Gamdi village in
Ahmedabad. "I initially did it to break the monotony. But, now it turns out
that this is good business," says Patel, whose son is settled in the US.

Official data shows there is a 9% growth in the number of farmers in Gujarat
over the last five years - there are 46.61 lakh farmers in the state. The
growth in numbers is largely driven by consistently good monsoon over the
last decade. A portion of it could also be realtors turning to farmers to
buy agriculture land.

State agriculture minister Dileep Sanghani says the number of farmers is
increasing since a large number of people who switched over to other
professions are returning to farmlands. "The number is higher in Saurashtra,
where farmers forced their sons to join other professions due to perennial
water crisis. Water availability is luring them back," says Sanghani.

Krupesh Pandya, 44, who worked as a godown manager for a tea firm left his
Rs 10,000 job to take up farming fulltime. "My income has increased five
fold," he says.

D M Vaghela, deputy director of state horticulture department, says a number
of subsidy schemes on net and greenhouses is a major pull.
Posted by Unknown at 21:55:00