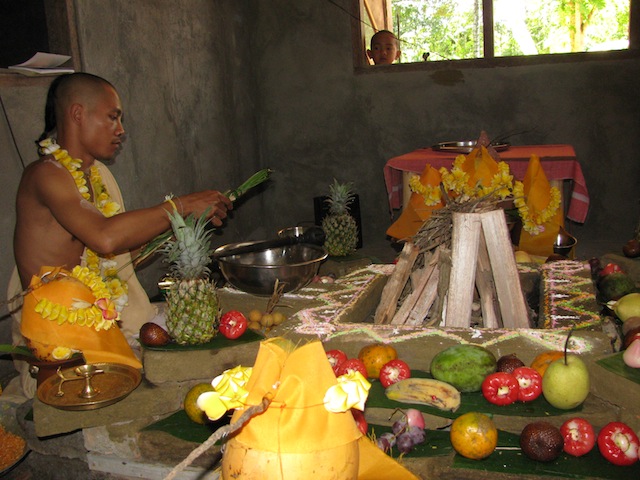 This morning we held a special class in memory of Bhagiratha prabhu. To our good fortune, one of the devotees close to Bhagiratha prabhu since his childhood, Sriman Kisora Krishna prabhu, arrived here at Sahyadri Sri Krishna Balarama Ksetra (SSKBK) the day before yesterday. Time was but too short to begin recollecting all the wonderful memories of this great Vaisnava who left our midst rather suddenly and unexpectedly.

I first noticed Bhagiratha prabhu in the late nineties at the Sri Sri Krishna Balarama temple in Denpasar (Capital City of the Province of Bali) where even as a young student in primary and secondary school he would come and associate with devotees by staying overnight at the temple. He was then known as Bhakta Nyoman Bagia. He was likely less than 10 years old when he started chanting the Holy names on japa mala. One of the earlier Balinese devotees who actually brought him and many other young students to Krishna consciousness was Sriman Dhritatma prabhu, a teacher by profession who was and remains a very active preacher.  By the time Bhakta Nyoman Bagia was 16, he was already very serious in his devotional service. Kisora Krishna prabhu recalls how he had vowed to hand carve and string his own tulasi mala that, because of its large size, he finished just a short time before his Hari Nama diksa ceremony in Bali In July of 2002.  He had just turned 18 and received the name Bhagiratha das brahmacary.

As part of the plan to send some Indonesian devotees to India for learning and training, I had selected both Kisora Krishna prabhu and Bhagiratha prabhu who were fortunate to obtain a three year Student Visa to study Yoga and Sanskrit under the Bharatiya Vidya Bhavan branch in Mangalore, And so it was that in the later part of year 2003 they both went to India together, this being Bhagiratha prabhu’s first visit to the holy land. It was during this period that he first visited our Sahyadri Sri Krishna Balarama Ksetra where he and prabhu Kisora helped develop the project in its very early days.

Within six months of his being in India, I got the news of the new proposed educational facility in Govardhan, the Srimad-Bhagavatam Vidyapitham, which was to be headed by Sriman Gopiparanadhana prabhu who was then taking applications. Soon after receiving this information, I contacted Gopiparanadhana prabhu who readily agreed to accept Bhagiratha prabhu from their very first semester in October 2004.

Bhagiratha prabhu took to Govardhan as a fish takes to water.  Somehow he was given the service to look after the school’s Gaura Nitai Deities although he was still not brahmana initiated. The following year, in October 2005, Gopiparanadhana prabhu asked me if I could award Bhagiratha prabhu his second initiation so he could serve the Deities full time. Since I was still not able to enter India, I recall giving him brahmana diksa long distance over the telephone. Gopiparanadhana prabhu was kind enough to perform the diksa ceremony himself. Bhagiratha prabhu was a good student. He was able to successfully complete his studies along with a group of some 20 foreign devotees from different parts of the world. By that time he had picked up Sanskrit nicely. He was gradually developing a deeper and stronger attachment for the land of Vrindavan, in particular for both Krishna and Balarama along with Giri Govardhanji. Once he wrote to me asking if he could worship personal deities of Sri Sri Krishna Balarama in their form of Govardhan silas as well as Shalagram sila, to which I consented.

Soon after leaving India in the year 2007, he asked me if he could compose a second line of my pranam mantra in Sanskrit, to which I also agreed. His deep attachment and appreciation for Govardhan was evident with his taking up the task of writing his own book describing the various pastimes of Lord Krishna in Govardhan in addition to various holy places in Vrindavan all depicted with beautiful illustrations. I asked him to begin a small Varnasrama College at Gaura Hari for which he recruited a few local students.

Whenever I would visit Indonesia, generally once or twice a year, he would assist me in different ways. He was a staunch advocate of the varnasrama mission and helped organize three yearly varnasrama seminars in Bali, the first being at the Gaura Hari temple in Gianyar in the year 2009, all of which were well attended. In my last visit to Indonesia in the year 2011 he accompanied me on visits to some of the far away islands from Bali such as Kalimantan and Sulawesi.

He was always very enthusiastic in serving. One such personal service included interviewing various senior devotees on the subject matter of varnasrama. He took this up very eagerly and completed five interviews within one year approximately. The devotees he interviewed were His Holiness Bhakti Vidya Purna Maharaja, His Holiness Bhakti Vikasa Maharaja, His Grace Gopiparanadhana prabhu, His Grace Atma Tattva prabhu and myself. The book came out under the title TRADITIONAL EDUCATION, Selected Interviews where Bhagiratha prabhu’s photo and short history is also included.

Bhagiratha prabhu liked to travel. He did some preaching in Cambodia as well as Thailand. He actually travelled with his Govardhan teacher, His Grace Gopiparanadhana prabhu, when he visited Bangkok, going out on Harinam and distributing Srila Prabhupada’s books. I remember visiting a Buddhist temple in Bangkok where they had on display the corpse of a dead body somehow kept in some liquid. Bhagiratha prabhu was visibly shaken seeing this dead body and this helped him become even more serious about his Krishna consciousness. His favorite pilgrimage place was of course Vrindavan. The devotees from Indonesia requested him to bring them on pilgrimage to India and so he began to serve as a guide bringing the devotees to both Mayapur and Vrindavan.

Two years ago approximately while I was at the Gaura Hari temple, noticing that I was worshiping a small ivory deity of Gopalji and a cow, he brought me his own Sudarshan Cakra Shalagram Sila and offered him to me for worship. I was extremely pleased and to this day I continue to worship his Shalagram Sila.

Bhagiratha prabhu loved performing kirtans. He was a good singer and was adept at playing both the harmonium and mrdanga. He picked up a small portable harmonium that he carried with him wherever he travelled. He would wrap this harmonium around his neck moving about the temple room enthusing devotees with his lively kirtans. He was also a very good dancer and always very cheerful in disposition. He learned how to perform yajnas and at different times devotees would request him to perform some particular samskara in their homes or at the temple.

When Gopiparanadhana prabhu passed away last year, Bhagiratha prabhu wrote two letters of appreciation on dandabats.com thus showing his deep love and affection for his beloved teacher at Govardhan. He expressed deep separation from his affectionate teacher and guide. He named his pen drive “Dauji” to help him always remember Balaramaji. He loved cows dearly.

Bhagiratha prabhu was in contact with many devotees many of whom he helped to bring to Krishna consciousness. He was a good preacher and his enthusiasm was contagious.

I am sure that all those who had the good fortune to come in contact with him will miss him dearly. He leaves behind his wife Bhaktin Mila and an adopted daughter “Gita Nagari”. He also leaves many Deities such as Sri Sri Gaura-Nitai, Sri Sri Krishna Balarama, Govardhanji, Lord Narasinghadeva and Shalagram silas all of whom he worshiped regularly and with great fervor. I remember once he had spent about three hours performing his morning puja feeling particularly enlivened on that day lovingly reciting Sanskrit slokas for the pleasure of his Deities.  Devotees close to him plan to continue the worship of all his Deities.

My dear Bhagiratha prabhu, what can I say? I must thank you for having been such an ideal disciple, student and teacher. You served with so much love and affection. I will miss your good association. May Krishna, Balaramaji and Govardhanji always be by your side along with Their beautiful cows. As I take darshan of your Shalagram Sila and Sri Sri Krishna Balarama I cry in grief and separation of your sudden departure. Although it is most painful, I remain confident that you will always remain well protected by your Lordships Sri Krishna and Dauji.

All glories to you and to your wonderful display of devotional service. I long for the day we can meet again and continue to serve in Srila Prabhupada’s sacred mission. I remain your ever well-wisher.  All good fortune and all blessings upon you. Jaya Radhe!