History of Lies, Thievery, and Deceit 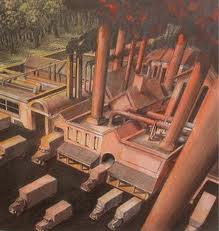 "This motorcar civilization will be finished within at most a hundred
years."
Srila Prabhupada, Dharma: The way of transcendence, Ch10

Thanks to Balabhadra Prabhu for this wonderful article.
*** Visit: www.globalvarnasramamission@blogspot.com ***

*Final Thoughts*
The American economy has been sucked dry by the Federal Reserve System.
Americans think they own property but the truth is the entire United States
has been mortgaged to the bankers. The Rothschilds and Rockefellers become
richer while the peoples of the world become poorer. The International
Monetary Fund and the World Bank are also designed to loan money to
developing nations with the understanding that they will never be able to
repay so with every loan made to a country, it becomes their death knell.
The entire world has been plunged into a debt economy which means 6 billion
people are in debt to about 250 men. But keep in mind that all their wealth
is phony because it is created money without any gold backing.
I really laugh when Wall Street bows down to Ben Bernanke who is nothing
more than a boot licker of the International Banking element who takes his
orders by phone too. So many people rejoice when the Federal Reserve has a
policy meeting and no interest rate increase happens. The truth is that we
should never have a Federal Reserve to begin with. They print money, loan
it into circulation, and the American people are strapped with more debt.
I remember leaving materials on the Federal Reserve at a meeting of
Concerned Women for America. The next day I went back and not one copy was
taken. The reason given me was because it was not approved material. Groups
like Concerned Women for America and the Christian Coalition and Rush
Limbaugh are something known as controlled opposition. They are allowed to
exist as long as they do not bring up the real issues. If they stick to the
created liberal Democrat Vs. conservative Republican agenda, they can exist
and the bankers will even make them famous. But you will never hear a
Beverly LaHaye, Tim LaHaye, Jim Dobson, Billy Graham, Gary Bauer, or any
other famous Christians ever tackle the real issues like the illegal Fed
which causes all the poverty in every country. If these people would think
for a minute that if $350 billion dollars a year was not being sucked out
of the economy and was used for the people in this country, we would surely
have enough to help other nations and our own problems. Crime would almost
be non-existent with a monetized money system. The Great Commission would
also be funded without worrying if there will be enough left over to feed
the children.
*THE TEN MEMBER BANKS OF THE FEDERAL RESERVE *
*All owned by the Rothschilds *
*Rothschild Bank of London *
*Warburg Bank of Hamburg *
*Rothschild Bank of Berlin *
*Lehman Brothers of New York* *
*Lazard Brothers of Paris *
*Kuhn Loeb Bank of New York* *
*Israel Moses Seif Banks of Italy *
*Goldman, Sachs of New York *
*Warburg Bank of Amsterdam *
*Chase Manhattan Bank of New York *
**In 1977 Kuhn Loeb and Lehman Brothers merged to create Kuhn Loeb, Lehman
Brothers, Inc. *
*Now ask a question - Where is the Federal Government of the United States
listed and how much does it get? I will answer it for you, it is not listed
because the Federal Reserve is private and it receives nothing. *
WAKE UP PEOPLE!!! WAKE UP!!! THE FEDERAL RESERVE IS ILLEGAL AND OUR
IMPOTENT CONGRESS REFUSES TO DO WHAT IS RIGHT AND ABOLISH THE FED. THEY
WOULD RATHER ALLOW US TO REMAIN IN BONDAGE FOREVER. DEMOCRATS AND
REPUBLICANS ARE BOTH USELESS ENTITIES BECAUSE THEY ARE BOTH BOUGHT AND PAID
FOR BY THE BANKERS.
I PERSONALLY WILL VOTE CONSTITUTION PARTY. THERE IS AN ALTERNATIVE YOU
INDOLENT AMERICAN.
THE NATIONAL DEBT IS PHONY!!!
*A Warning to the bankers and their sycophants!*
*There is a God in Heaven which you have spurned and ignored and He has
allowed you, in His plan, to pull this Fed scam on the stupid and indolent
American people. There is coming a day, and very soon in which all of you
will stand before Christ and be cast into an eternal hell. Every secret
deal you made, every war which killed innocent children and young men and
women, you will give account for. You will have no power nor excuse. Many
of your colleagues are awaiting the judgment right now and they will weep,
as you will, realizing that for a few years of luxurious living, an eternal
hell is awaiting. That is the interest you will pay.*
For an excellent presentation on the entire history of usury leading to the
illegal Federal Reserve System, go to: http://www.themoneymasters.com/
------------------------------
*"The Creature from Jekyll Island" by G. Edward Griffin is probably the
best book on the Federal Reserve and the banking system of the world. He
covers what a bailout really is? He covers the International Monetary Fund
and the World Bank. He also covers the reality of how Socialism ruins a
country and destroys a countries' economy by removing wealth from the
wealthier countries and giving it to the poorer countries. These poorer
countries use the money to boost the size of their government and the
reality is that the people never see one penny of the money which is given
to these dictators in small countries. The International Banking system is
designed to reduce the wealth of our nation and reduce our living
standard. This book will help you understand what is really happening at
the present time. It is not chance but a planned destruction of the United
States to bring it into the New World Order as a reduced third world
nation. If you don't think this is happening now, then go back and watch
your sports.*