No social structure, No spiritual understanding and No good character 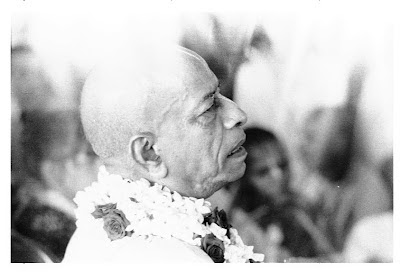 Great thanks for this post.
---------- Forwarded Message ----------
From: talvan
Subject: [srilaprabhupadanectar] Remembering Srila Prabhupada - Our next
program
------------------------------------------------------------
Morning walk at City Beach
On his morning walk at City Beach, Prabhupada spoke more about the flaws of
modern civilisation. Paramahamsa described a news article he had read
describing how New York City was bankrupt and had practically given up the
fight against noise, pollution and crime.
"Because it is conducted by fourth-class men," Prabhupada warned, "the whole
civilisation will collapse. There is no social structure, no spiritual
understanding and no good character."
A municipal bus, with only one or two passengers on board drove past.
Prabhupada had witnessed the same empty bus on his last few walks on the
beach. This was an example of wastage, he said. He recalled a flight from
Nairobi to London where the only passengers had been his own party of five.
"Such a big plane, consuming so much petrol, and vacant for passengers. Many
times we had that experience -- such an artificial way of life."
Technological advancement, Prabhupada pointed out, was not real
civilisation. "They do not know what is advancement. They had no knowledge
that: 'I have to die, and I have to accept another body after death.' They
do not know it. So long as this body is there, they are trying to have a
very comfortable position. But they do not know that after this body, they
have to accept another body. So how will this technology help them? If, in
this life, by technological advancement they live very comfortably, and next
life they become a dog, then where is the advancement? That they do not
know."
Prabhupada gave the example of the three-week visa they had obtained to come
to Australia. "Suppose in Perth I begin one skyscraper knowing that I shall
remain here for only three weeks. Is this intelligence? Similarly, at any
moment I can be kicked out."
Prabhupada cited an English proverb. "There are many dangers between the cup
and the lip. You are going to drink tea. The distance is " Prabhupada
demonstrated the distance by holding an imaginary cup -- "Here is cup and
here is lip -- there may be many dangers. So suppose in drinking tea there
is some choking within the throat and coughing, you may die immediately.
This is our position."
As the walk proceeded, Prabhupada pointed out that all the vacant land
around him was another graphic example of the technologically advanced
society's misuse of resources.
"We can produce so much food grains if it is utilised -- fruits, flowers,
vegetables and grains. This land is very good for producing potatoes and
watermelon. But who is doing that? Watermelon is such a nice thing; and
potato, you boil potato and take watermelon, you have full nourishment. Very
innocent and simple food. But this land is vacant."
Later, Prabhupada summed up. "Caitanya Mahaprabhu said: sunyayitam jagat
sarvam govinda-virahena me. Sunyayitam means zero. The advancement of modern
civilisation is zero, but if you add many thousands of zeros, does the value
increase? No, it simply remains zero. But if you add a "one" it will
increase the value. That "one" is Krsna consciousness. That will make this
material civilisation important -- a hundred, a thousand times more
important."
- From "The Great Transcendental Adventure" by HG Kurma Prabhu
======================================================================

Our next program
Paramahamsa surveyed the morning newspaper. The day before, in what US
President Ford described as "an act of piracy", the Cambodian Government
seized the 10,000 tonne US freighter Mayaguez, 96km off the Cambodian coast
in the Gulf of Thailand. Now, in retaliation, the US Navy had sunk three
Cambodian gun boats. Paramahamsa reported these war-like events to Srila
Prabhupada in his room.
Prabhupada was ominously dismissive: "The capitalists will destroy the
communists, the communists will destroy the capitalists and the whole
civilisation will be destroyed. Then, a new civilisation will arise. It is
inevitable. People will be forced into the forest. Our next program will be
to organise the farm communities, to give the people full engagement. If
they are fully engaged, then they will forget the allurement of the Western
'civilisation' of sex and intoxication. In this way there must be strong
fighting against the demonic civilisation to save human society."
- From "The Great Transcendental Adventure" by HG Kurma Prabhu