"First you make them human, then you talk about United Nations" 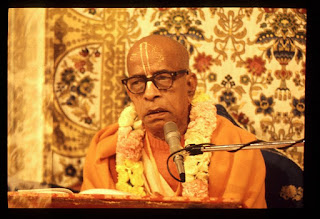 Thanks to Nanda Kumar Prabhu and H.H. Bhakti Vikas Maharaj for this post!

Bhargava das:  Mauritius was developed by two devotees. It's a small island off the east coast of Africa. Prabhupada said some very profound things in Mauritius. He was very serious with the young people who came to visit him.
He didn't like the idea of dependence on a cash crop. Sugarcane was the cash crop.
His comment to those young people was "The first duty of a nation is
to become self-sufficient." And that was an extremely profound statement because if you look at the world situation and you look at so many of the trouble spots, it's all about trying to exploit somebody else's natural resources - like America and Europe trying to exploit the oil resources of other areas. And if each country would take that seriously, becoming self-sufficient, you wouldn't have these major conflicts going on in the world.

So when Prabhupada said that, it was extremely profound. When one of them asked, "What is your movement doing to help the world?" he said, "We're taking animals and turning them into human beings," and then he gave a very fiery lecture. Then at the end he told Brahmananda, "Take the tape of this and send it to Back to Godhead, and they should make an article out of this.
The title of the article should be 'First you make them human, then you talk about United Nations.'"