No Jobs, No Hope and No Cash! 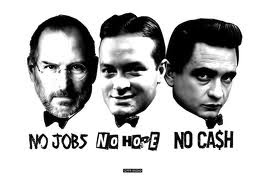 Ten years ago, America had Steve Jobs, Bob Hope and Johnny Cash. Now it has
no Jobs, no Hope and no Cash. Or so the joke goes.

Only, it’s no joke. The line is pretty close to reality in the US. The less
said about Europe the better. Both the US and Europe are in decline. I was
asked by a business channel in 2008 about recovery in the US. I mentioned 40
quarters and after that I was never invited for another discussion.

Recently, another media person asked me the same question and I answered 80
quarters. He was shocked since he was told some “sprouts” of recovery had
been seen in the American economy.

It is important to recognise that the dominance of the West has been there
only for last 200-and-odd years. According to Angus Maddison’s pioneering
OECD study, India and China had nearly 50 percent of global GDP as late as
the 1820s.   Hence India and China are not emerging or rising powers. They
are retrieving their original position.

The dollar is having a rollercoaster ride at present.

Similarly, the crisis. It is a US-Europe crisis and not a global one. The
two wars – which were essentially European wars – were made out to be world
wars with one English leader commenting that ‘we will fight the Germans to
the last Indian’.

In this economic scenario, countries like India are made to feel as if *they
*are in a crisis. Since the West says there’s a crisis, we swallow it hook,
line and sinker.

But it isn’t so. At no point of time in the last 20 years has foreign
investment – direct and portfolio – exceeded 10 percent of our domestic
investment. Our growth is due to our domestic savings which is again
predominately household savings. Our housewives require awards for our
growth not any western fund manager.

The crisis faced by the West is primarily because it has forgotten a
six-letter word called ‘saving’ which, again, is the result of forgetting
another six letter word called “family”. The West has nationalised families
over the last 60 years. Old age, ill health, single motherhood – everything
is the responsibility of the state.

When family is a “burden” and children an “encumbrance,” society goes for a
toss. Household savings have been negative in the US for long. The total
debt to GDP ratio is as high as 400 percent in many countries, including UK.
Not only that, the West is facing a severe demographic crisis. The
population of Europe during the First World War was nearly 25 percent and
today it is around 11 percent and expected to become 3 percent in another 20
years. Europe will disappear from the world map unless migrants from Africa
and Asia take it over.

The demographic crisis impacts the West in other ways. Social security goes
for a toss since people are living longer and not many from below contribute
to their pensions through taxes. So the nationalisation of families becomes
a burden on the state.

European work culture has become worse with even our own Tata complaining
about the work ethic of British managers. In France and Italy, the weekend
starts on Friday morning itself. The population has become lazy and
state-dependent.

In the UK, the situation is worse with drunkenness becoming a common
problem. Parents do not have control over children and the Chief Rabbi of
the United Hebrew Congregation in London  said: “There are all signs of
arteriosclerosis of a culture and a civilisation grown old. Me has taken
precedence over We and pleasure today over viability tomorrow.” (*The Times:
* 8 September ).

Married couples make up less than half (45 percent) of all households in the
US, say recent data from the Census Bureau. Also there is a huge growth in
unmarried couples and single parent families (mostly poor, black women).
Society has become dysfunctional or disorganised in the West. The government
is trying to be organised.

In India, society is organised and government disorganised. Because of
disorganised society in the West the state has to take care of families. The
market crash is essentially due to the adoption of a model where there is
consumption with borrowings and no savings. How long will Asian savings be
able to sustain the western spending binge?

According to a recent report in *The Wall Street Journal* (10 October 2011),
nearly half of US households receive government benefits like food stamps,
subsidised housing, cash welfare or  Medicare or Medicaid (the federal-state
health care programmes for the poor) or social security.

The US is also a stock market economy where half the households are
investors and they have been hit hard by bank and corporate failures. Even
now less than 5 percent of our household financial savings goes to the stock
market. Same in China and Japan.

Declining empires are dangerous. They will try to peddle their failed models
to us and we will swallow it since colonial genes are very much present
here. You will find more Indians heading global corporations since India is
a very large market and one way to capture it is to make Indian sepoys work
for it.

A declining West is best for the rest and also for the West, which needs to
rethink its failed models and rework its priorities. For the rest—like
us—the fact that the West has failed will be accepted by us only after some
western scholars tell us the same. Till then we will try to imitate them and
create more dysfunctional families.

We need to recognise that Big Government and Big Business are twin dangers
for average citizens. India faces both and they are two asuras we need to
guard against. The Leftists in the National Advisory Council want all
families to be nationalised and governed by a Big State and reform marketers
of the CII variety want Big Business to flourish under crony capitalism.
Beware of the twin evils since both look upon India as a charity house or as
a market and not as an ancient civilisation. ****

Namaskaars, All Glories to Srila Prabhupada!

Email ThisBlogThis!Share to TwitterShare to FacebookShare to Pinterest
Labels: Chaos of modern world