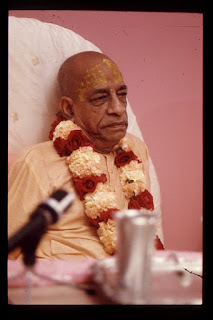 "Saints and sages in the renounced order of life, do go to the houses of
the householders at the time of milking the cow early in the morning
expecting some quantity of milk for subsistence. A pound of milk fresh from
the milk bag of a cow is sufficient to feed an adult with all vitamin values
derived from food and therefore saints and sages would live only on drinking
milk." (SB 1.19.39. -1964 purport)

"Prabhupada wanted milk and sent Srutakirti out. Srutakirti was his new
servant, and he was fresh from America. After ten minutes, Srutakirti
returned pot in hand, complaining that the hotel staff wouldn't cooperate.
Prabhupada insisted that he wanted hot milk and Srutakirti left again for
the hotel kitchen. Ten minutes passed and Srutakirti again returned with
cold milk. The staff wouldn't let him into the hotel kitchen.
Prabhupada looked sharply at Srutakirti, "You are not serious!" Sudama Vipra
Swami, "Big Dave," heavy set, with a skull and crossbones tattooed on his
arm, picked up the milk pot and walked out. He returned five minutes later
with steaming hot milk. "Sometimes you have to yell, Srila Prabhupada," he
said. Prabhupäda smiled. " (from My Glorious Master by Bhurijana Das)
"The men had come with some prepared questions. They first wanted to know
how Srila Prabhupada related his strong interest in dairy products to modern
thinking on cholesterol. Dr. Harrap wondered whether Çréla Prabhupäda was
disturbed about such views. Prabhupada looked to Satsvarüpa Goswami for
clarification. Satsvarüpa pointed out to Prabhupäda that there were modern
theories that milk was actually harmful.
Prabhupada was incredulous. "Milk is harmful? How is it harmful? If it is
harmful, why are you giving milk to children?"
Dr. Harrap explained that there were differences between cow's milk, which
had a very low proportion of polyunsaturated fatty acids-only about 2 per
cent-and human milk, which contained a much higher level-10 to 12 per cent
polyunsaturated fatty acids.
Prabhupada was not about to change his views. "But I think there was a book,
Miracles of Milk, written by an American. He has greatly valued milk and
milk products. Similarly, we Indians, we give very, very much importance to
milk and milk products."
Dr. Harrap agreed, but continued to describe how, in recent years, there had
been shown to be a relationship between the cholesterol level and the ratio
between saturated and polyunsaturated fat in the diet: the lower the level
of polyunsaturated fat, the higher the level of cholesterol in the blood.
This, he explained, had been associated with heart disease. As a result
there had been quite a move amongst many medical practitioners to prescribe
diets that were low in saturated fats.
"Still," Prabhupada explained, "milk is very important." He cited that Krsna
Himself recommended cow protection. "We are following the leadership of
Krsna. Krsna was so fond of cows, cows' milk, cows' butter, that he was
stealing butter."
Prabhupada pointed to the painting of this pastime on the wall. Formerly,
Prabhupada explained, saintly persons used to live in the forest and their
sustenance was fruits and milk. "They used to keep cows and draw milk from
them, as well as whatever fruits were available in the forest, and they have
given us these literatures."
Indicating the volume of Srimad-Bhagavatam on his desk, Prabhupada
continued: "Vyasadeva has written Mahabharata, one hundred thousand verses,
and similarly, this Srimad-Bhagavatam, he has given us eighteen thousand
verses. And each verse is full of so much grave meaning, that if you study,
it will take months and months together. So they developed such nice brains
simply by drinking milk and eating fruits." (from The Great Transcendental
Adventure by Kurma Das)
Posted by Unknown at 22:41:00