Water harvesting in the desert! 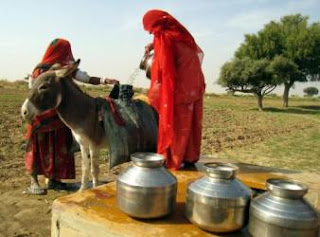 Breaking free of the shackles of government aid for basic needs
By Manu Moudgil
23 Jan 2012
Gahziram's family has been living at Ekalpaar village of Jaisalmer district
for ages but managed to build a pucca house only recently. Besides rearing
livestock, he owns 50 bigha of agricultural land which earned him Rs 2 lakh
last year.
"Of the savings, Rs 1 lakh was spent on the house. Earlier we barely used to
manage food grain for our personal consumption," he recalls.
Several beris like these provide sweet water to villagers of Jaisalmer
district (Photos: GOI Monitor)
As you stand listening to him, surrounded by the lush green of mustard, gram
and taramira, the fact that this area falls in the famous Thar desert seems
lost. One pucca house rises after another when you walk down the village.
Lot many Ghazirams have belied the geographical connotations of this area.
The neighbouring Dablapaar village reflects similar prosperity. Till five
years ago, most villagers used to migrate for work while some of them would
end up begging for food in nearby Ramgarh town. Today, the inhabitants have
not only become self-sufficient on food and water front, they are also
participating much more actively in the affairs of panchayat.
The new found self-respect is an indicator of the success people have tasted
in their fields through revival of traditional knowledge related to
methodical use of rainwater.
"Our ancestors had been self-dependent in all respects but the younger
generation fell into the trap of relying on government for their basic
needs. Now self-reliance is again taking roots and in last five years,
several villages have prospered," says Chattar Singh, who has been working
with the community to revive traditional water harvesting methods.
The area registers minimum rainfall in the country and irrigation facilities
are nil. Still, local communities have devised ways to conserve the
rainwater, however less, that nature bestows.
Dropping its common name, khet, a field gets to be called khadin here
because it's cultivated through rainwater collected in a depression. Khadins
are developed by building a paal or dorrah (earthen embankment) which helps
harvest the water coming from the vast aagaur (catchment area). The
impervious layer of bentonite beneath the soil takes up the task from here.
If at an optimal depth of 10-15 feet, this layer arrests further seepage of
water thus providing sufficient soil moisture for rabi crops to flourish.
Building khadins is a science of working along with nature which the people
have perfected through ages. The bow-shaped embankment is built in east-west
direction so that the desert wind bellowing from south to north strengthens
it with each passing year. 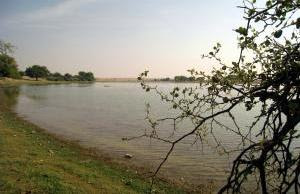 The bow shape divides the force of incoming water preventing any excessive
damage to the embankment. This incoming water also carries along with it
nutrients from the catchment area thus enriching the soil fertility.
Once the water fills up to an optimal level, the rest is allowed to spill
over. The idea is not to forcibly stop water but to humour it so that it
stays in the khadin without damaging the wall. "Only 1-1.5 feet of water is
needed for a khadin. The surplus is allowed to move on to the next khadin
which is how water connects people here. They keep consulting each other on
how and when to stop or release the water," says Singh.
If around 300 small khadins spread over rain fed area of the district help
create personal bonds, big khadins like Derasar at Sehua village can be
called the pinnacle of community work.
To an inexperienced eye this khadin spread in 500 hectare may seem like an
instance of commercial farming but 250 families belonging to three different
villages tend this land for several crops.
This spirit of self-reliance also extends to provision of drinking water for
both villagers as well as their livestock.
There is no rule but out of traditional wisdom nobody defecates in the
catchment. The whole area is cleaned before the arrival of monsoon. In fact,
the community welfare is so important that nobody has built a khadin in the
catchment area of Biprasar lest it would halt the water flow to the pond.
Biprasar pond serves 12 surrounding villages and utmost care is taken to
keep it clean
The pond is believed to have 120 beris (small wells) of which 24 have been
restored. The same impervious layer, which acts as a moisture retainer for
khadins, provides sweet water if present 15-50 feet underground. Even if the
pond dries up, these beris can serve the population for three years.
It was with this vision in mind that these water sources had been developed
years ago. But due to poor maintenance in the recent past they had fallen
into disuse.
"Five years ago when the work to restore these beris was started, people of
all age groups used to come from surrounding villages and work together. Had
these beris been constructed through funding, they would have cost lakhs.
But when a community takes such work upon itself, it becomes an easy task
done with perfection," says Farhad Contractor, a social activist, who works
on water harvesting systems.
Several villages have now taken upon themselves to restore these valuable
water sources. Women of Dablapaar used to walk 12 km to reach Biprasar to
fetch water. Today, they have beris within their village which provide them
drinking water the whole year round.
Had the locals relied on government, they would have been forced to
reconcile themselves with the huge concrete tanks that dot the villages.
These tanks, fed by the Indira Gandhi Canal Project through pipes, are
supposed to be supplying drinking water.
However, ground realities contradict promises. "Either most of these tanks
remain empty or the quality of supplied water is so poor that it is used
only for washing. It is not safe to drink this water which is why people
prefer beris or talaabs," says Mohan Singh of Habur village.
Such apparent irregularities in government projects vis a vis perfection in
community work has seamlessly led to greater participation of people in
governance issues. This was evident in the last panchayat elections when
several seasoned leaders lost their support base.
Needless to say people have won the fight for survival. They are now
challenging the fiefdoms. - GOI Monitor
Posted by Unknown at 20:53:00