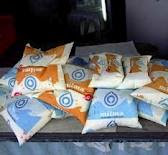 With animal fat and urine amongst other things:

NEW DELHI: Beware, your daily glass of good health could actually be doing you harm. As much as 70% of milk samples picked up from the capital by a government agency failed to conform to standards.

Of the 71 samples randomly taken from Delhi for testing by the Food Safety Standards Authority of India (FSSAI), 50 were found to be contaminated with glucose and skim milk powder (SMP), which is usually added to milk in the lean season to enhance volumes.

Elsewhere in the 33 states and UTs study, milk was found adulterated with detergent, fat and even urea, besides the age-old dilution with water. Across the country, 68.4% of the samples were found contaminated.

Only in Goa and Puducherry did 100% of the samples tested conform to required standards. At the other end were West Bengal, Bihar, Chhattisgarh, Jharkhand, Orissa and Mizoram, where not a single sample tested met the norms.

Other prominent states fared just a shade better. Around 89% of the samples tested from Gujarat, 83% from Jammu & Kashmir, 81% from Punjab, 76% from Rajasthan, 70% from Delhi and Haryana and 65% from Maharashtra failed the test. Around half of the samples from Madhya Pradesh (48%) also met a similar fate.

States with comparatively better results included Kerala where 28% of samples did not conform to the FSSAI standards, Karnataka (22%), Tamil Nadu (12%) and Andhra Pradesh (6.7%).

A study conducted by Food Safety Standards Authority of India (FSSAI) across 33 states has found that milk was adulterated with detergent, fat and even urea, besides the age-old practice of diluting it with water. Across the country, 68.4% of the samples were found contaminated.

The most common adulteration was that of fat and solid not food (SNF), found in 574 (46.8%) of the non-conforming samples. This, scientists say, is because of dilution of milk with water. The second highest parameter of non-conformity was skim milk powder in 548 samples (44.69%) which includes presence of glucose in 477 samples. Glucose could have been added to milk probably to enhance SNF.

The report asked state enforcement authorities to check whether the new FSSAI rules are being complied with. An earlier first-of-its-kind study of milk boiling habits that involved 2,400 women across eight major cities had found that Chandigarh leads the pack in boiling milk, doing it more than three times a day. While 84% women in Kolkata boiled milk for more than five minutes, about 46% of women in Pune preferred to boil milk in high temperatures. The study, by the Indian Medical Academy, said, "About 49% boil milk more than thrice before consumption. Around 56% boil it for more than 5 minutes, and 73% don't stir while boiling," said Dr Pawan Gupta, IMA.

This only confirms that food adulteration is common in India. Even milk, consumed primarily by children, isn't spared. What's particularly worrying is the kind of substances used to adulterate, including toxic chemicals. This shows the trade off between the risk of getting caught and the 'reward' of huge profits is skewed heavily in favour of the latter. The government must focus on raising the risks to the adulterator. One way of doing this is by hiking the penalty, including making it analogous to attempt to murder in extreme cases. It's equally important to regularly check foodstuff for adulteration and ensure speedy trials.
Posted by Unknown at 20:53:00