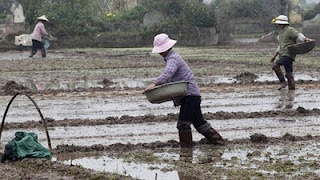 In the morning of 5 January, a team of police and militia was despatched to
a farm that belonged to the family of Doan Van Vuon.
Their mission was to force 52-year-old Mr Vuon and his family out and to
seize their land, a stretch of marshes along the coast in the northern city
of Haiphong.
For full article: http://www.bbc.co.uk/news/world-asia-16571102


The BBC's Nga Pham looks at how a violent stand-off over farmland repossession has focused attention on the issue across Vietnam.  It was like a scene from an action movie.

In the morning of 5 January, a team of police and militia was despatched to a farm that belonged to the family of Doan Van Vuon.

Their mission was to force 52-year-old Mr Vuon and his family out and to seize their land, a stretch of marshes along the coast in the northern city of Haiphong.
As they moved in towards the farmhouse, a homemade mine buried in the grass exploded, knocking two policemen off their feet.

From inside, Mr Vuon's men began firing shotguns at the approaching police, injuring six, including the local district police chief.

Reinforcements were sent in a show of force on a scale that had never been seen before in the city - more than 100 police officers with firearms, sniffer dogs, and minesweepers in bullet-proof gear.
The head of Haiphong police himself was present, together with four of his deputies. Loudspeakers broke the morning quiet.

After four hours, when police finally broke into the house they found it empty apart from a couple of gas cylinders that officers believed were intended for use as improvised explosive devices. All the men were gone.

Debt challenge
The incident immediately became headline news, not least because of the unexpectedly fierce resistance by the farmer's family. Rarely have the police been fired at during land clearances before.
As all land in Vietnam belongs to the state, Doan Van Vuon was given the land to farm by the district government for 14 years, according to an agreement between the two parties. 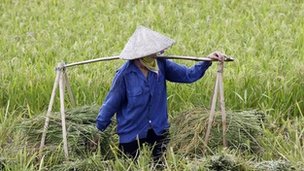 Now the local government wants it back, saying part of it is needed for a future infrastructure project. The remaining part can be rented at a higher cost.
Mr Vuon protested against the decision, arguing that his family had spent 20 years developing the land. Not only did he have to work hard, he also had to borrow a large sum of money.
Without the land rights, he could not see how he could repay the debt and make a living.
Eight meetings to negotiate new terms with the family failed and the local government decided to evict them.
Mr Vuon, his brother and two other relatives were arrested one day after the shooting incident and they are now in detention on attempted murder charges.
His wife, Nguyen Thi Thuong, told the BBC: "We were pushed into a corner. We didn't know what to do. We had nowhere to go."

Privatisation calls
The local authorities insist everything was done in accordance with the law.
Yet the public are now raising questions about the Land Law, which many think is far from perfect.
The law, in effect since 1993, stipulates that households and individuals are entitled to land rights for a "limited period" of 20 years. After that, subject to availability and other factors, local governments will decide whether the land use can be extended.
This, some say, gives officials at district level too much power in deciding people's livelihoods and creates a fertile environment for corruption.

The 20-year limit is another topic for heated debate among the population and in parliament.
Former Vice-Minister of Natural Resources and Environment Dang Hung Vo, when in office, argued that farming was a long-term business and 20 years were not enough for farmers to yield a proper income. He proposed increasing it to 99 years or abolishing the time limit.
More than a million individuals in Vietnam were awarded land rights in 1993. Next year some of them will face the danger of their farmland being redistributed, or worse still, confiscated.

There are already calls to privatise land in order to manage it better and more fairly.
According to Vietnam's constitution, all land belongs to the state and comes "under ownership of the entire people". To privatise land ownership means changing the constitution, something politicians are reluctant to consider as it clashes with "the very core principle of socialism".
Nguyen Dinh Loc, former minister of justice who sat on the drafting board of the current constitution, recalled in an interview with domestic media that "nobody had the courage to speak about [privatisation]".

Land rights remain one of the most contentious issues in Vietnam, with hundreds of cases of public grievance occurring each year, each more serious than the other.
And the problem continues ticking away while lawmakers struggle to figure out what to do next.
Posted by Unknown at 21:29:00