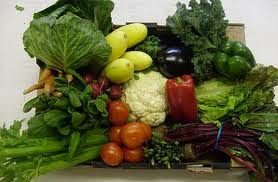 Devotees at Gita Nagari, ISKCON’s 350-acre farm in scenic Port Royal, Pennsylvania, have recently launched a Community Supported Agriculture (CSA) program to supply nearby city temples with organic produce grown as an offering to Krishna. It’s a move that follows Srila Prabhupada’s instructions on the relationship between farm communities and city temples.

Temple president Dhruva Maharaja Dasa, a former mechanical engineer, had absolutely no experience in farming or growing crops before moving to Gita Nagari three years ago. And there were few to help him start his CSA, for Gita Nagari has long been a very small community of dedicated members.

But none of that stopped him and his wife, Parijata Dasi, starting a garden last year.

“We did considerable research, first learning about CSAs from a book called Sharing the Harvest, by Elizabeth Henderson,” he says. “The idea was introduced in North America in the 1980s, but is becoming especially popular now, with over 13,000 CSAs in the country. Basically, it involves families choosing a local farmer to grow and deliver their vegetables for them, so that they can eat naturally and know where their food is coming from.”

Dhruva and Parijata next spoke to many local farmers, some of whom were willing to mentor them. Their first practical step, taken in May of last year, was to officially register Gita Nagari as a Certified Organic farm. Then it was time to start growing.

“I didn’t really know how much I should cultivate, so I just set aside a three-acre plot,” Dhruva says. “After some trial and error, our work paid off, and yielded a plentiful harvest. We signed up forty-five families for our CSA in the nearby city of Philadelphia—thirty from the ISKCON temple there, and fifteen from a yoga studio. Even after that, and after supplying Gita Nagari’s Deities Sri Sri Radha Damodara and their devotees, we still had surplus. This we sent to the local Tuscarora Organic Growers Co-Op, who sold it to restaurants or hotels in the Baltimore/Washington area.”

This year, thirty families from Washington D.C. have joined the Gita Nagari CSA, with D.C. temple president Ananda Vrindavana Dasi personally signing them up out of her enthusiasm for the project.

“We learned a lot from our experience last year, and found that by using the space more efficiently, we could supply them all with only half an acre of land,” says Dhruva. “In fact, just last weekend, a very experienced devotee farmer visited us from Florida, and was amazed by the abundance of vegetables. At different times of the year, we grow potatoes, tomatoes, spinach, eggplant, peppers, okra, butternut squash, cucumbers, yellow squash, bitter melon, kale, collard greens, lettuce, and green beans. By Radha-Damodara’s mercy, our soil is very fertile.”

Families who have signed up for the CSA pay the $375 for a season—May through November—in advance, which contributes towards growing expenses such as seeds and fertilizer.

Dhruva and his wife then grow the vegetables, harvest them, drive the two-and-a-half hours to Washington D.C. themselves, and deliver 15 to 25 pounds of produce to their customers once every two weeks. Both the varieties of vegetables and the amounts vary according to the time of year or other real world considerations.

“The idea behind CSAs is that the farmer and the members share the abundance of the harvest—but they also share the natural risks of growing,” Dhruva says. “For instance, we may have less produce if there is bad weather, or an infestation of pests. Or we may have the same vegetables two or three times in a row, according to the season. When that happens, to help our members in training themselves to eat seasonally, we provide them with different creative recipes.”

“It’s the natural order, and of course the only way to become self-sufficient, which is what we are aiming for,” explains Dhruva. “These days we are spoiled by supermarkets stocking whatever produce we want that has been flown in from all over the world, but that is not fresh by any stretch of the imagination.”

In contrast, Gita Nagari’s produce has been literally pulled out of the ground the day before customers get it, while the price is no more expensive than the organic produce you’d buy at the supermarket—the thirteen deliveries members get every season work out at about $29 per delivery. Due to Gita Nagari’s highly fertile soil, it’s also very nutritious, and is of course grown by devotees in the land of Sri-Sri Radha Damodara.

“This model of farm communities supplying produce to city temples was desired by Srila Prabhupada, who often spoke about it,” Dhruva says. “And Gita Nagari is strategically located for that purpose. We’re very close to five temples—two in New Jersey, and one each in Philadelphia, Washington D.C., and Baltimore.”

Next year, Dhruva hopes to take Gita Nagari’s CSA program to a whole new level by supplying each one of these temples—with the added possibility of New York—with vegetables and flowers.

Since he and his wife are already stretched thin taking care of the farm’s Deities, cooking, cows, etc, Dhruva hopes to recruit a full-time farmer, who will cultivate no less than twenty acres next year. As well as supplying to temples and their congregations, Gita Nagari aims to sell its produce to wholesale and farmers’ markets.